Sixteen-year-old princess, Piper Parish, is a disappointment to the citizens of Capalon, a STEM-structured kingdom where innovation is valued above all. Her older sister, the queen, views Piper’s tears during their parents’ funeral as a weakness, not to mention her strange affinity for singing. When Piper receives an anonymous note stating her mother is still alive and living in the enemy kingdom of Mondaria, Piper chooses to risk death and flees Capalon to prove once and for all that she’s not just the queen’s defective little sister.
Posing as a Mondarian citizen named Paris Marigold, Piper bumps into a cute black-haired boy named Ari who encourages her to audition for the King’s 100, an esteemed performance court of singers, magicians, and drummers. Piper lands a spot as a singer and dives head-first into a world of glittering dresses, girl-code, sugar, blackmail, and physical contact-all while taking direction from an evil maestro.Under Mondarian law, Piper will be killed if her identity is revealed. But living a life without the freedom to love might actually be the most dangerous risk of all.

Disclaimer: Review copies were provided by the publisher and TBR and Beyond Tours as part of my participation in the tour.

Whenever I would hear the word kingdom, castles with high turrets, knights in shiny horses, and princesses in bulbous gowns are the things that go in my mind, which makes this book a different taste of the same recipe. I really liked the way it was set in a future world. The way they would reference to the time, the places, and the culture that we have right now is dumbfounding. It reminds me how time is passing and how small I am compared to it.

This book was really fun to read because of its vibrant characters. There’s a lot of them even though the story doesn’t exactly revolve around them. Honestly, sometimes I forget who is who because there’s a lot and it takes long scenes before some of them resurface again. Despite that it was really fun to read their interactions. It’s a big circle that made me feel like I’m in with the secret.

If you’re a fan of The Selection series, of magic and conspiracies, then you should definitely try this book. The King’s 100 is definitely not just for the king’s entertainment, but also for us. I’m excited to know what happens next to our ‘princess’. In the mean time…

here are the top 5 reasons why you should read the King’s 100:

As a person who considers herself in the middle of this Venn diagram, I’m excited to see how these two kingdoms would coexist.

And mind you, they’re really cool. The fact that this is set in the future makes the places untold but at the same time really familiar.

I’m not going to spoil but I really liked how these little moments, these little things, made the most changes. On a regular day, you could as easily ignore them as what you had for lunch, then they’d turn out to be the game-changers.

I really just want my very own Chip. Being a technology that is with you most of your life and reminds you to the things you should be doing, he’s just so convenient.

Karin earned her bachelor’s degree in Hospitality and Tourism Management from Purdue University and served as an event planner for two Big 10 universities and various non-profits for over eight years before becoming a stay-at-home-mom. She enjoys chocolate-covered peanuts, uninterrupted sleep and singing with other people. Karin lives in Ohio with her husband, daughter, cat and dog.

For US residents (sorry Int’l readers!), get a chance to win a final copy of The King’s 100 by submitting your entries on the rafflecopter link below. Giveaway ends on October 6th!

All thanks to TBR and Beyond Tours for letting me be part of this tour. To read more about this tour, check out the schedule here. 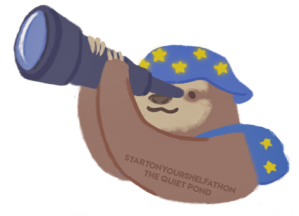 Ynnah has
read 5 books toward
her goal of
24 books.